Posted at 10:00h in #ChangeOurGame Monthly Heroes by WRSA
0 Likes

We’re pleased to announce the January Hero of the Month Jenny McRae.
Our sporting region wouldn’t be what it is without her. 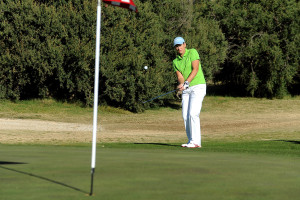 Jenny McRae won her 10th Horsham Golf Club Championship in a row. Chipping onto the 18th.

Jenny McRae is one of the region’s most respected golfers. Jenny has won the Horsham Golf Club ladies championship an incredible 14 times and consistently supports women’s golf at the club and across the region. Jenny has been a talented sportswoman throughout her career excelling at tennis and basketball before taking up golf, which she blames husband Gary for getting her hooked. Jenny won the Woman In Sport Award at the Horsham Sports and Community Club Sports Star of the Year awards in 2015. Her achievement epitomised what the award stands for – highly respected, hard working, humble and supportive – all sum up Jenny McRae to perfection. It is people like Jenny McRae who youngsters can look up to and emulate as we try and change perceptions of women in sport and around our clubs. The WRSA would like to acknowledge Jenny McRae as our Change The Game ambassador for January.